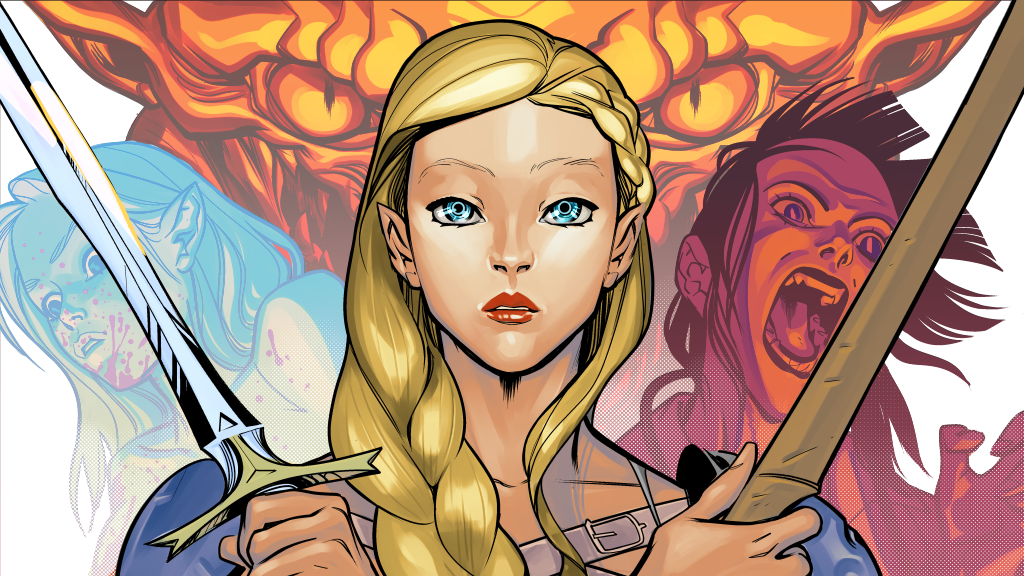 Glarien of White Ash #1: a fantasy series for mature readers

Glarien follows the early days of White Ash's most dangerous elf as told through the eyes of Rachel, a young woman living in 1970's NYC

Latest Updates from Our Project:

Just wanted to post a quick update and say thank you for filling out your surveys so quickly.  In less than a week, 86% of you have already turned yours in.  So to hold up our end of things, we've sent out out your Glarien Digital Shorts bundle and White Ash Volume One PDFs (for those of you who backed at the catch-up  level).

We have also begun mailing out the White Ash hardcovers.  The first 40 hit the mail today.  We hope to get the rest of those (and the single issue, catch-up bundles) out by the end of next week.  That way, it won't be that long of a wait for those of you who'd perfer to read a print copy.

In terms of reading order, if you've gotten the White Ash: Volume One PDF, read that first.  Then read the three Glarien shorts in chronological order:

Let us know if you have any issues accessing your digital files through Backerkit (they should send you a link tonight/ by tomorrow morning) and we'll make other arrangements for you.

Otherwise, we'll be back in touch in a few weeks to update you on the progress of the rest of the Glarien material.

Thanks again for the support everyone.  Hope you enjoy your first tastes of White Ash and Glarien.

Our Glarien surveys should be on their way to your inbox now. If they don't reach you by tomorrow am, feel free to shoot us a DM and we'll send you a direct link.  They should be reasonably straight forward, but let us know if you hit any bumps when filling them out. We're planing on sending out the catch-up portion of the rewards as soon as we have most of the address in.  So please answer the survey as soon as you have a chance.

Well be back with another email next week with the reading order and the release of the first batch of PDFs.  Until then, we'd be remiss if we didn't point you to another couple of friends who have projects that are live on Kickstarter.

This anthology of Western-inspired stories features tales from a slew of talented creators including Erick Palicki, Fell Hound, Mario Candelaria, Rio Burton, Skyler Partridge and Liana Kangas (who did that incredible Glarien Variant cover for us). Outlaws seeking redemption. Cowpolk seeking revenge... horses. If you like any of those things, you should CHECK IT OUT.


Keeping with the theme of adventure, Steven Prince's Monster Matador has been running around Kickstarter for a week now and has already stampeded past its goal.

Monster Matador is a delightfully demented Kaiju throw-down that follows Matador Ramon Alejandro Estévez Guerrero as he travels a post-apolcalyptic future to fight monsters and by extension, make a better world for his daughter. (BEST DAD EVER)

This book is simply nuts... in a great way.  If you scroll through some of the project images you'll see what we're talking about.  Don't try to avoid this one.  CHARGE ON OVER now and take a look.


Thanks again, everyone.  Have a fabulous week and let us know if you have any issues filling out the survey.

Surveys should be out in the next day or so.  We're just waiting on Backerkit to give the approval.  This process used to be a couple of hours.  But now it seems to take a couple of days.

When they do drop, please be sure to fill them out ASAP.  This is especially important if you backed at one of the catch-up tiers.  We've already begun boxing up the hardcovers and we plan on mailing those out as soon as the majority of you have responded and we have your addresses on file.

We will be sending out all the catch-up PDFs and Glarien short stories on the 19th along with a "suggested reading order."

In the interim, we'd love to point to a couple of friends who have projects live on Kickstarter right now.  The first is the latest Boston Metaphysical Society book from Madeleine Holly-Rosing.

The Book of Demons is the EIGHTH Boston Metaphysical book Madeleine has launched on Kickstarter and they all have been fabulous. If you like Steampunk/ Gaslamp fantasy stories, you've got to CHECK IT OUT.  There's a reason Madeline has won a bunch of awards for her writing and BMS, this is one not to miss.


Keeping with the metaphysical theme, but with a little less Boston in it, also on Kickstarter right now is the second issue of Rylend Grant's The Jump.

The Jump follows a man who gets caught up in the world of astral projection.  But what starts out as a tale of spiritual exercise to find peace, quickly evolves into a high-stakes conspiracy thriller. I've read the first book in this series and Rylend's setting up an incredible world.  I can't wait to read the next issue.  Regardless, you should take a look and see if it's for you.


Thanks again, everyone.  We'll be back with another update as soon as the surveys are out.

Charlie and the rest of Team Ash (Conor, Fin and Romina)

First we say thank you, again.  What a mind-blowing campaign.  We're beyond thrilled that so many of you have joined us on this journey.  And so you have a roadmap of where that journey is going to take you, here's what the next couple of months will look like.

Week One — Kickstarter collects fees and backers who may have forgotten that their credit card has expired/was stolen/was maxed out buying stock in Gamestop, will be given a chance to update it.  PLEASE CHECK and see if you're one of the 50 backers that have a notification from KS.

Week Three (around the 12th of April) — As soon as Kickstarter has transferred the funds to our account, we’ll send out our BackerKit Surveys. Please fill these out as quickly as possible. We’re hoping to start shipping out the catch-up materials by the end of next month.

Week Five (around April 26th) — Once we have all the surveys back and we have your emails and addresses in hand, we'll send out all the catch-up PDF's.  We’ll also start shipping out all the physical catch up bundles (hardcovers and single issues).

Important Note: if you backed at a catch-up tier level you will be getting TWO SHIPMENTS. We hope to have Shipment #1 in your hands by the end of May.

After that... we'll keep you updated on our progress.  Right now we anticipate an on-time delivery of Glarien #1 (PDF’s end of May, physical copies the end of June). Hopefully that won't change, but with the world being as volatile as it is right now, it's hard to be 100% sure about anything. Regardless, we always keep our backers in the loop.

If you have any questions, always feel free to reach out to me here on Kickstarter or find me on the following social networks:


Thanks again, everyone.  We'll be in touch really soon.

Charlie and the rest of Team Ash